Carolina King Thunderclap! Help me spread the word. The King is coming!

Please click on this link to support the release day blast for Carolina King. Coming soon! All you have to do is click the link and agree to allow Thunderclap to send out a post for you on July 21st. ‪#‎CarolinaKing‬‪#‎TeamMack‬ ‪#‎startyourengines‬ ‪#‎GwendolynGrace‬

I love this cover by Hang Le, photography by Amanda Surringer and cover model Rhys West!

"“It was the kind of kiss that ignited a fire in your soul and you would do anything to stay as the flames consumed you.”"

""Later, Firefly." I watched him turn and stride away as if he owned the road he walked on, and in a way, he did. " I'd love to thank Secret Places Photography for photographing our sexy model, Daniel Herrmann, for the cover of Carolina King and a shout out to Hang Le for her superb cover design skills!  I have an incredible team ❤ 3-3.5 stars I don't know. I felt like Mac was too much. The books starts off with her being young and in an unhealthy relationship then we jump to 4 years later where she's this sexually liberated woman, BUT we don't see how that complete 180 came about. Sometimes she sounded like an oversexed teenage girl and not the 24 yr old, stronger and wiser woman she was supposed to be. It was a bit cringy at times. I also really didn't like the backtracking with the other lovers (there's no cheating, just flashbacks) I felt like maybe we should have gone through all of that first before she met Daniel. It didn't help in terms of me liking her because I didn't want to read about her with other men when I was trying to warm up to the idea of her and Daniel being a couple. So I started skipping the flashbacks. I got the point the author was trying to make, but I think she should have adjusted the timeline a bit.

The best thing about the book was that it was HOT! Daniel especially, just swoon! I am intrigued by the past lovers and their stories as well. Overall, not a bad read.
Tweet

Knocked Up by the Bad Boy 3.5-4 stars The first chapter of this book was like BOOM!! I love a jerk and Johnny was giving me the tingles! I could see how he might rub people the wrong way. Dirty mouth and wicked mind, oh I was loving it. But... I don't think the author allowed enough room to turn him around and by the time you were supposed to see his change of heart, I had a hard time believing he was sincere... or maybe he never really was? He just seems like that guy who would still probably keep a mistress on the side at some point down the road. *shrugs*

There were also few inconsistencies that another round with a proofreader would have probably caught. For example, in one scene Maya was wearing a dress then later on when she was leaving she tucked his card into her jeans pocket? Huh? Did she bring a change of clothes? At one point Johnny blindfolded her then later on she was looking into his eyes? When the did the blindfold come off? Little stuff like that was sprinkled about.

Overall, it packed a punch. The grittiness of the MC and the danger of the mafia were done well. It makes me want to read the rest of her stuff.
Tweet

What the Lightning Sees: Part Three Great wrap up to the story. Jake was swoon worthy. Haven was actually likable, prickly, but likable. I could identify with her and her choices. I wanted the last book to really hit and it didn't. It was good but not WOW for me.

-Minor inconsistencies in the story line.

-Too many secondary characters and I got a little confused however I'm sure they will get a spin-off.

-There was supposed to be a dominant side to Jake but ... since the book was written in his POV I thought we could have gotten some background as to why he liked to tie her up and why only bind her wrists. Then there was a little slap on the behind here and there. That part of the story was so feather light that it was almost like the author wanted to add a little kink in there but didn't know how to focus on it and develop it as part of Jake's character.

-Certain elements of the story were just dropped off and not really explained... For example, Sandy Fox. I thought she was some sort of spoiled celebrity who would have an issue with Haven being pretty. I mean it was the main focus of book one and part of book 2 but it really didn't come to a head. Sandy basically said that she hoped she was a bridesmaid in their wedding. Huh? I also thought the issue with Millie was over too easily. There was all this angst and build up then she pretty much called Jake an idiot for believing her and to fuck off. No real explanation, just... whatever...I'm done with you. Oh, and Louis. He was a big issue for Jake but nothing seemed to come of the build up of that character either.

Having said all that, it was still a good story and worth the read.

What the Lightning Sees: Part Two This one went a lot better than the first and I totally saw the cliffhanger coming but it still hurt hear it. I fell in love with Jake. He was a good guy and I'm glad Haven finally saw that. Good second book.
Tweet

What the Lightning Sees: Part One This one had a slow start and things really didn't kick in for me until about 50%. I am a fan of Louise Bay which is why I stuck it out. I really liked the development of Jake and Haven's characters. I like that she was a bit prickly. Good first book overall.
Tweet Holy Wow! I could not put this book down! It was everything I wanted and so much more. I loved how I thought I could predict what was going to happen but turned out to be wrong but then found out I was partially right. My mind was just blown! This is how you write a complex dark thriller that really packs a punch! Ella Dominguez is the master!
Tweet 5 stars!! YESSS!! I loved it! I don't have much time to read anymore so I'm a lot pickier nowadays. I can usually tell by the first chapter whether I care to spend time anymore time with the book. Well, I couldn't put this one down. My heart ached after the first chapter and I knew I wasn't going anywhere. Wow. Carrick is swoonworthy but then again I'm kind of partial to racers right now. ;) I got where Andi was coming from for sure but I think having Carrick was worth the risk. Hot. OMG! Hot! But this is Samantha Towle so who would expect anything less. Read it!
Tweet 4 stars! I really liked this story and the hotness was definitely there. I totally believed the connection between Melissa and Derek. There were times I didn't understand some of the things that Melissa did but that's okay, the story as a whole was very entertaining. I thought the ending was a bit rushed and I was please to see there is another book for the couple. Yay!
Tweet Beautiful. Brilliant. At first I was a little underwhelmed with the story. My expectations were so and I wanted it to grab me right away. The story built slowly and methodically and before I knew it I was all the way in and completely consumed. Ugh, Miles. I wanted to smack and hug him with every turn of the page. Poor Tate. I could relate to her completely. It was perfect. Emotional and sexy. Everything I could have every wanted.
Tweet

When You Make It Home 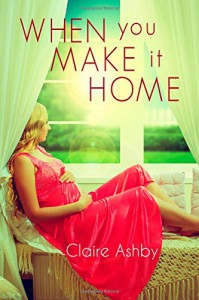 4-4.5 stars I really enjoyed this book but was a little disappointed in the way some of the events unfolded. Up until about 50% it had the potential to blow my mind but then it kind of fell short. Mild spoiler... I wanted more to be said about Theo's time in Afghanistan, just a quick flash black would have satisfied me. Then the mess about the reality stars in the book store was a bit unnecessary in my opinion. At times it was hard to remember who certain characters were because there were several and switch was so abrupt. Also I felt the emotional reactions were a bit off. I couldn't tell if the brother was mad at her, or if she was mad at him cause I would have been. Or what the deal was with Her dad and Hazel. A tad creepy and talk about delayed reaction.

Overall, I enjoyed it. The story kept my interest and OMG Theo! I die. *sigh*
Tweet 5 stars! Let me first just say...who knew what the Falcon Club was cause I didn't. I was completely clueless just like Erica and what it was never occurred to me! I mean my eyes jaw dropped. Say what??? After that you couldn't pull me away! I loved the unanswered questions and the angst about the future. No fair on the ending! I need more Jaime and I can't wait for book 2!!
Tweet